How Self-knowledge is Crucial for Changing the World

The world is in a dire state in many ways, and yet most people carry on the same regardless. There’s a lot of information about meaningful issues available through the internet, and what’s really happening behind the scenes can be discovered by anyone digging in a little. This information could be a catalyst for real change; unfortunately there are so few people who are actually interested in digging deeper to find out what’s really going on, let alone actually doing something about it. This is not just a social or political problem, but one that goes deeper, into the nature of what it is to be human.

Looking at a few figures about how some people live paints an awful picture—over 850 million people in the world are without enough food to meet their basic nutritional needs; more than five million people suffer from illnesses from poor drinking water; in the last forty years, approximately thirty percent of the world’s cropland has been abandoned because of soil erosion and degradation; 2.8 billion people survive under two dollars a day; wars keep erupting and nations face huge burdens of debt.

Problems like these are not new, they have been going on for a long time, and it says more about humanity itself than it does about any particular political or technological system. If you take a look back at history, you’d see the same kinds of things repeating; one society is opposed to another there’s cruelty, exploitation, warfare, etc. Yet most people seem to find it normal, and even acceptable.

Knowledge is Crucial for Positive Change

To change the way society acts requires knowledge, both of an internal (spiritual) and external (material) nature. Anyone can educate themselves about the world and the society in which they live, while at the same time understanding their inner nature. In both cases, it’s a matter of shining a light on what you aim to see and exposing what was hidden to the light of truth. What you see translates into knowledge and knowledge has to be translated into action for it to have any impact or use.

Bringing about external change in the world, though a worthwhile activity, can get stifled in the long run because of the animalistic, egocentric way human nature is.

If human nature doesn’t fundamentally change, the same mistakes keep repeating. If a society is full of individuals who are full of greed and hatred and who wish to exploit others, it will find ways to allow those characteristics to be expressed, no matter what good intentions or laws may exist.

When we change within, our actions change too. Each individual has hatred, greed, anger, avarice, etc., and this is the problem. Fortunately, it is possible to change significant parts of human nature, but it requires knowledge of a spiritual kind to fundamentally do it.

Knowledge can give us the capacity of change and those who fundamentally change can become self-realized and can make enormous contributions to society. But it requires spiritual knowledge and practice to enable the change. That is spiritual knowledge of a certain kind, which includes all the elements necessary for change, and for the awakening of individual consciousness and higher intelligence.

I tend to be very pessimistic about what a society can actually achieve, because most people are not interested in changing themselves. Most are content to follow like sheep, and be told what to think, or to be told not to think much at all, and there is a profound coldness and indifference to change.

There are people who want change, and those who know how to have a responsibility to share that knowledge for the betterment of society.

The Effects of the Media Upon the Ways People Think 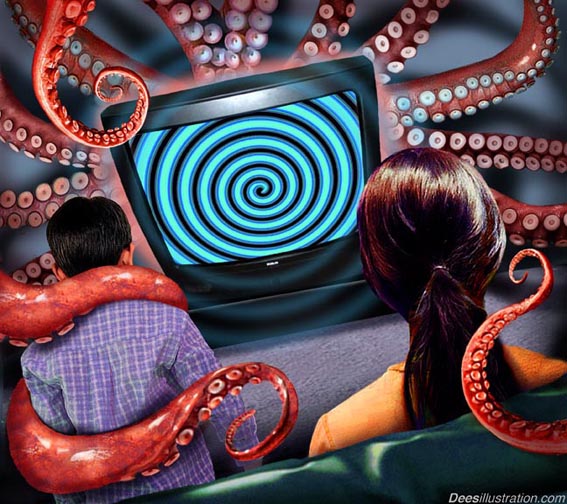 The way we are brought up makes a difference. In many societies people are brought up to be passive and not to be independent questioning citizens. When the media gives information from a particular perspective, most people will tend to absorb that, and children are brought up heavily influenced by the views expressed through the media. In many ways, people trust the media and many of its celebrities. It gives us entertainment, news, and information, and it seems to be a kind teacher to us throughout our whole upbringing and life. And so people get used to it, and just sit back and be absorbed into it and believe it’s really giving them a portal to the world, informing them of how things are. But it has its own agendas, and it misses and even ignores many of the key factors of wisdom, knowledge and change.

Those who offer inner knowledge then appear to be obscure voices on the margins of society; but it’s the media and the agendas behind it that are responsible in a large part for this marginalization of alternative spiritual knowledge. And yet this knowledge is at the root of religions, is fundamental to humanity’s understanding of itself, and it permeates the whole of life and creation.

The media gives out information from its own point of view, for its own purposes, and to further the agendas of those who control it, and you rarely if ever find information that can lead to deep, radical inner or outer change, which is what humanity needs if we’re going to tackle these major issues.

How Did It Get This Bad?

It’s because of the powers of darkness and because we evolved from animals. We have all of the animal desires and drives, yet with the human mind we could have progressed, but we’ve not developed spiritually in line with our technological development and nor with the institutions of society. Without changing spiritually we don’t have the wisdom to be able to deal with the political and technological advances we have made, and so we’re dangerously out of control.

Our capacity for destruction increases as our technology advances. We inherit the technology and information, but we don’t inherit the wisdom, because it’s ultimately an individual choice. And so most people look towards their leaders in society to do things for them, they give up their responsibilities and rights as individuals and become like sheep. They follow their leaders mostly for superficial reasons as the conditioning of society has brought them up to be that way. Often the leaders are instruments of other forces controlling society beneath people’s knowledge, but the public is usually happy with that, happy to be domesticated humans, entertained fodder for the powerful to exploit. This has repeated through history as well.

It all comes down to the individuals within a society, and if they are basically domesticated animals, with an intellect, who are unable to question deeply, then what’s happening in the world and to the planet is only to be expected. We as a species have the means to get ourselves out of the problems we are facing, but it seems we just don’t have the wisdom to do it.

Hope in the Future

Theoretically the world could change if enough people had enough wisdom and acted to bring change, which could have varying degrees of effect. But in reality, there are so few people who actually wish to change inwardly in a real spiritual sense. There may however be individuals trying to awaken who may work together with higher values and knowledge for the common good, potentially they being a beacon of hope for those who look for truth and who wish to find peace and happiness.

The more that the messages of truth get out in various ways in society, the more that those in the mainstream can understand them. Truth is often a very simple message.

I’m not optimistic myself about the future in the sense of the disasters and the like that could be ahead for the world; suffering is clearly going to continue, as will the famines, the injustices, and the wars, because as a humanity, we don’t want to fundamentally change. People are happy with the way things are psychologically. There may be change for the better in many different aspects in society, brought by those who are courageously fighting for the truth and higher values, but I believe that overall it won’t be enough to really affect the destructive direction the planet’s heading in.

Higher Values vs the Values of Mainstream Society

As a society we get fooled so easily. If there’s an election where we have to choose between the lesser of two evils, it’s likely we don’t have a genuine democracy.

Everything done for the greater good can be useful and the more darkness in the world that can be stopped the better. But it won’t stop the core cause of what’s going on, as that lies within each person. People will want the latest TVs, bigger, faster, best looking cars, and the latest consumer goods, and they’ll keep wanting more of them, as there’s a lack of understanding of the correlation between the material and actual happiness.

When we have a certain level of material standards, that is, when our basic needs are met, then we have a plateau in their inner level of happiness. Adding material goods to that doesn’t really improve it. Once our basic needs are met, and we search for inner peace and find it, then our inner level of happiness is going to be far greater than it would be if we were searching for material goods, power, and all these kinds of things. So we can harm ourselves and make our lives bitter, by not pursuing peace and genuine happiness.

Unfortunately most people can’t see the need for self-knowledge, being led to believe that through advertising, the media, and through the instant gratification of pleasures, by acquiring more unescessary material things that they’re going to be happier, but it’s not the case. Hedonistically or irresponsibly pursuing these things bring repercussions, both for the person pursuing them, and for other people around the whole planet. Somewhere, someone is working in a sweatshop to make the clothes we wear; somewhere, ancient forests are being cut down to make wood chips for the garden, and on and on it goes.

It’s very difficult for a society to understand the need for spiritual values, but it’s essential that at least to see the need for self-knowledge, it can elevate the level of an entire society if enough people are educated in it and the price for ignoring it is very high.